German public discourse is overwhelmingly in favor of continued war and escalation in Ukraine that could put us dangerously close to a real World War. Instead, the EU should push for a good peace deal for Ukraine. 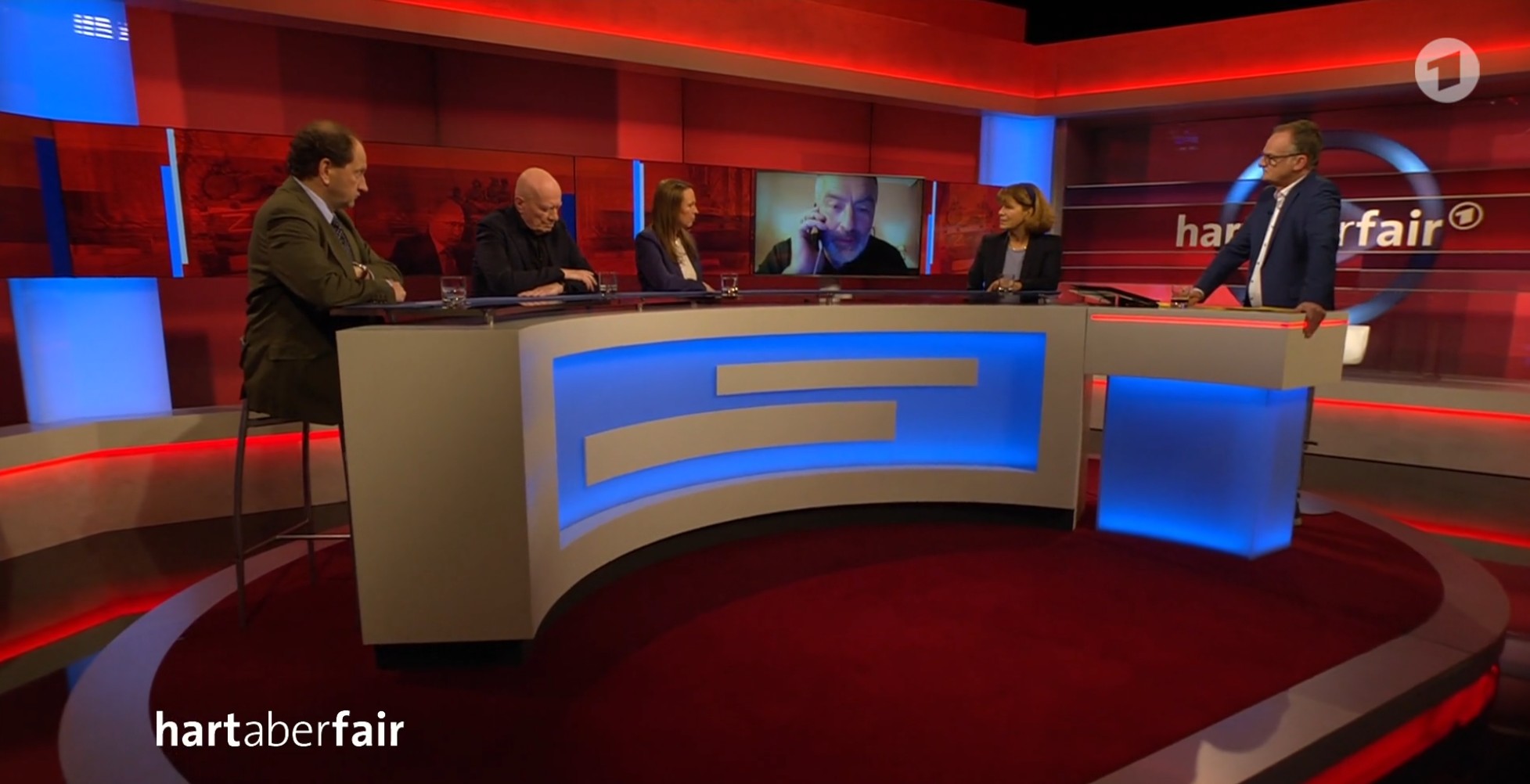 The last days have been incredible to watch. Just a few weeks ago, the discussion was “only” about introducing an immediate and complete stop on fossil imports to Germany from Russia which would probably have crippled the German economy and cost jobs in the current environment of previously unseen price hikes. Currently, calls for arming Ukraine unconditionally to the teeth are the trend. The opinions acceptable in popular weekend political talk shows range all the way from 1.) arming Ukraine with German weapons 2.) arming Ukraine with East European weapons and replacing those with German weapons. That’s it! In fact the guy “only” calling for a complete fossil embargo on Russia to pressure Moscow into peace talks was viciously attacked even by the talk show host. To call for peace talks instead of weapons makes you on par with COVID-deniers and other loony conspiracy theorists. And of course an apologist for Putin’s war crimes.

I feel like I need to state that I condemn Putin’s invasion of Ukraine and that my heart goes out to Ukrainians dying and having to flee their homes and to ordinary Russian citizens suffering because of economic sanctions. We should aid Ukrainian refugees with everything we’ve got and be vigilant to prevent their exploitation. But I also want to emphasize that NATO (meaning US) policy of the last 20 years is in large part to blame for the geopolitical setup that brought about this war! And are we now really supposed to believe that the Ukraine is winning this conflict and thus this is not the time to negotiate a peace deal? I am no military expert but I find it much more plausible that Russia has been holding back its military might so far. Majority opinion states, that Russia has to be defeated on the battlefield, so that then “Ukraine” (meaning the US) can dictate the terms. Arguments that the EU should be mediating in peace talks rather than getting involved in the armed conflict are met with the argument that “Ukraine should not be denied agency”. Well guess what: Ukraine had agency back in January. All they had to do is say “We are not going to join NATO”, of which there never was any reality anyway. Now even their fast track acceptance into the EU is a serious possibility. Really? After the constant (justified!) complaining about Hungary and Poland, we are now prepared to admit Ukraine, a deeply corrupt, nationalistic and mafia-infested state, without first making them go through the standard constitutional and structural reforms prior to EU admission? We must have completely lost our minds, EU. And also, what will this even accomplish? Will we then send German and French troops to the aid of the new member state? Or do we suppose Russia is going to be impressed by this and retreat? Is it anything more than a symbolic gesture that is supposed to ease our collective conscience, but which will end up causing enormous issues and cost an insane amount of money for the EU on the long run? Of course, we are not supposed to even discuss all of this, that would be very insensitive considering Ukraine’s current predicament. Just as we are not supposed to discuss what will happen to those billions of dollars worth of heavy weapons that are delivered into the chaos of a war zone where I’m sure everyone has better things to do than keeping track of them.

Indeed, Chancellor Scholz (a man whom I even criticized in past posts for his all-too-russophilic policies in dealing with Russia, completely disregarding environmental policy) has come under increasing pressure from his own coalition partners (Greens and FDP) and the CDU/CSU for being too careful and slow on weapon deliveries to Ukraine, and for “not showing enough leadership”. To which criticism he rightly responded: leadership is also not always bowing to public opinion and political pressure from others. Indeed, now he is even criticized for receiving Indian prime minister Modi, who has refused to participate in the sanctions against Russia. Well thank God someone is still trying to keep us out of war and avoid further economic disaster. To be honest, I can’t understand for the life of me where all this crazy warmongering is coming from. I was always counting on anti-war sentiment in Europe being strong enough to preclude the possibility of a World War III with EU involvement. I might have been wrong. Is it the appeal of the good old David vs. Goliath narrative and the gross over simplification of casting the adversary (Putin) as Satan incarnate and the West as the force of good? And when people are arguing for weapon deliveries on account of Ukrainians dying for us, protecting “our values” and “way of life”, can’t they see how incredibly cynical that is? They can’t seriously think fuelling the conflict further is saving lives and preventing war crimes from being committed! In fact, there is now less talk of the prevention of human suffering and suddenly victory is what the European public seems to be demanding. As of yet, no one will actually come out and say the obvious extension of their pro-war argument: that we should put NATO boots on the ground! Because if the stakes are so high, if Europe’s very existence is threatened well then it’s not a big stretch to say we have to take on Russia directly. Currently, the narrative is being built up and public opinion fired up in a way that sooner or later there will be nothing else left to escalate to but a real World War III scenario - this is why we should deescalate now, before it’s too late.

The time for a strong EU is now

I admit that I am ashamed of how Western Europe is handling the Ukraine issue, just as I am in a constant state of disbelief whenever I watch or browse mainstream media outlets. Also, I am weary of voicing my opinion about the Ukraine war when talking to friends, because my views advocating for a peace deal have now become fringe and I don’t want to be labelled some kind of “Putin apologist”. Indeed, the only German political party that is strongly advocating for a peace deal is the far-right nationalist AfD (just as LePen in France and Orbán in Hungary are). The German Left (Die Linke) is at least for the most part against weapon deliveries but they are currently preoccupied with a #metoo scandal. What a dismal state for our public discourse to be in.

Why can’t Europe find its own voice and mediate in the Ukraine conflict so that we may find a way to restore peace, stability and prosperity to our continent? I reject the often voiced concept of a new bipolar world order emerging, leading to a clash between “democracies” and “autocracies”. Rather than being dragged into this new cold war, European leaders must stop acting as mere conduits for US policy and our media must stop echoing the talking points of US media outlets (which currently sums up as “weapons, weapons, weapons”). We should realize that it is the crisis of our own western democracies, the gross social inequality, the degradation of the working and middle class, the failure to modernize our energy infrastructure and address the climate crisis that has caused China and Russia to challenge the West ever more successfully. It follows that we must look inward to address this challenge and I trust Europe to have far better answers than our US partners, whose two-party political system is in deep crisis and its overgrown military industrial complex makes real change hard if not impossible. Indeed even on Ukraine, there were EU initiatives to stabilize the situation: the Minsk Accords, negotiated with German-French mediation (“Normandy format”), of which nobody talks anymore even though they should be the basis of a new peace deal along with a form of neutrality for Ukraine.

So the EU must learn again to think and act as a sovereign entity. Otherwise it will be the EU’s undoing, and with this the end of a dream of European integration I spent my formative years growing up in. Yesterday, it was the 19th anniversary of my country of birth, Hungary, joining the EU. Well, what a day to be alive. It’s not too late yet - let’s begin by negotiating a good peace deal for Ukraine.