Gemany’s second most supported Bündnis 90/Die Grünen Party will run on a bold social and climate agenda including doubling of carbon price, no production of combustion engine vehicles after 2030, 45 % tax for incomes over 100 000 EUR, 24 months of parental leave and flexible working hours. No decision over candidacy for chancellor. 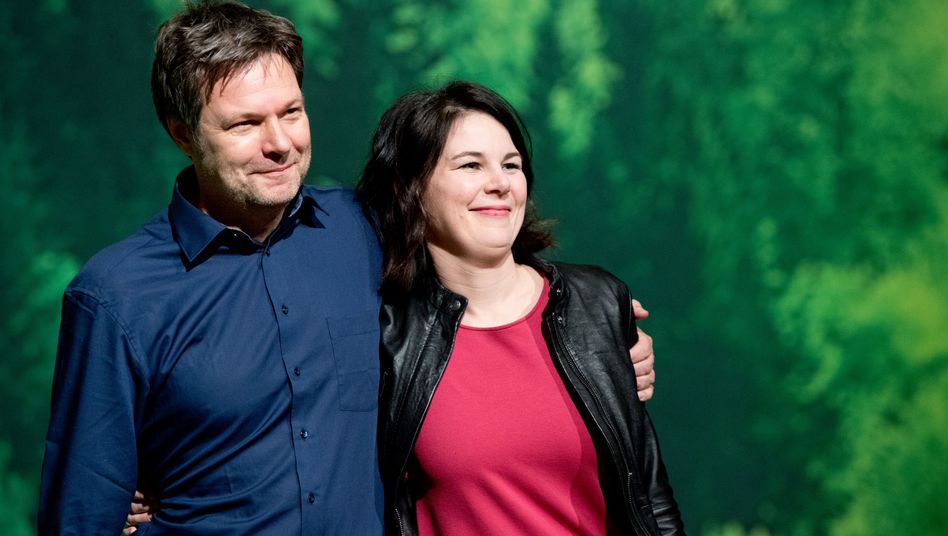 After Die Linke and SPD, Germany’s Bündnis 90/Die Grünen party announced its party platform for the 2021 Federal Elections on March 19. The 136 page document was presented on Friday by Annalena Baerbock and Robert Habeck, the duo co-chairing the party since 2018.

Next to traditional green topics, the agenda surprises in some of its key aspects aimed at tackling social inequality. The party would like to invest a large sum of 50 billion EUR a year in green infrastructure, an ambitious goal that would require renegotiating passages of the German constitution that cap the federal debt at 0.35% of the GDP, introduced by the “debt break” (Schuldenbremse) amendment in 2009.

The platform certainly sets more ambitious goals than the current Merkel government’s 55 % reduction of CO2 emissions until 2030, aiming for a 70 % reduction in the same time-frame. Also, the directives of the Paris Agreement should be mirrored in the German constitution, the Greens argue, thereby introducing a “CO2 break” to control all future legislation for its effects on the climate. In further contrast to the current governing parties’ plans, the Greens plan to increase the price of CO2 to 60 EUR per metric ton already in 2023 instead of a step-wise increase to 55 EUR by 2025.

A modernization of German railroad tracks, a European network of night- and express trains is also part of the program, as well as an expansion of bike lanes in cities. The speed limit on Germany’s roads would be capped at 130 kmph.

It is also evident, how the Greens are trying to ditch their image as the “Prohibition Party” (Verbotspartei). Before, the Greens have often faced populist media criticism (mostly from tabloid newspapers, such as the “Bild”) of being the party that wants to ban all that brings joy to life, including meat consumption, helium-filled balloons, driving fast in large combustion cars and the list could go on. More recently, the Greens have made the headlines because in a burrow of Hamburg led by them, the council made a decision to deny building permits on any new single family houses. The decision was based on increasing apartment shortage in the area, but a prominent party politician also argued for the right of communes to “use space optimally” in an interview with the Spiegel, also saying “Single-family homes consume a large surface area, a lot of construction material and energy and they lead to urban sprawl and therefore generate more traffic” . This was quickly publicized as yet another ban by this prohibition party, with the other parties CDU, CSU, SPD and FDP rushing to capitalize on voter sentiment regarding the German dream of owning your own family home in a country where only 45 % of the population own their own property. In the pandemic with many families being stuck with children at home in a small apartment, this was an especially cheap shot.

This incident probably had a role in the change of tone in the new party platform, the preamble of which bears the title “Invitation” (Einladung). Instead, the party is now focusing on the promise of a better life: “The future will be quiter, cleaner and healthier.”, “Fewer cars in the cities mean more space for us people. Quieter streets and cleaner air will serve those especially, who cannot afford the Villa in the peaceful suburbs”.

In their concept on tax policy, the Greens propose a 1 % per year and person tax on assets over 2 million Euros. Furhtermore, a tax increase in the highest earning tax bracket in Germany’s progressive tax system. Singles earning over EUR 100 000 per year and couples with incomes surpassing 200 000 can expect a tax increase to 45 % and an even higher bracket above EUR 250 000 / 500 000 yearly income will be introduced with an income tax of 48 %.

Parental leave would be increased to 24 months from the current 18 months. Minimum wage should increase to EUR 12. A right to home office should become law, but employers should also provide office space for all employees. Full-time work should be transformed into a flexible 30 - 40 hour workweek. The infamous “Hartz IV” unemployment benefit, which I mentioned earlier should be replaced by a universal basic income without sanctions for non-compliance. A million new apartments would be built as part of a federal program in highly urbanized areas. Commissions and fees when buying properties should decrease.

From the tone of party chairpersons Baerbock and Habeck, it is clear that the Greens see themselves as part of the next government coalition in Germany. According to Habeck, parties of Merkel’s coalition are “lame and tired”. He added, that Germany appears to the outside as being saturated and unwilling to change. The new party platform of the Greens would provide an ambitious but realistic program which would secure prosperity and freedom on the long-term according to him. Baerbock added, that the election platform represents “a willingness to govern and represent the breadth of society”, clearly positioning The Greens as a popular party.

Gains and losses compared to 2017 in polls. Source: www.bundestagswahl-2021.de

And with good reason. According to recent polls, The Greens are polling over 12 % ahead of their last election results in 2017 and are gaining in support on Merkel’s CDU. The biggest question currently doesn’t seem to be if The Greens will be part of Germany’s next government, but who else. The Greens are currently the only party that would be part of all the possible coalitions after the 2021 elections to receive a governing majority of over 50 % in the new Bundestag based on current polls. These are black-red-green (CDU, SPD, Greens 422/598), “Jamaica” (CDU, FDP, Greens 373/598 seats), black-green (CDU, Greens 314/598 seats), and “traffic light” coalition (SPD, FDP, Greens 300/598 seats). Only the famous “K Frage” remains unanswered. The Greens plan to announce the chancellor candidacy of either Baerbock or Habeck after Easter.

Having now introduced the party platforms of The Greens, Social Democrats (SPD) and The Left (Die Linke) on OUTPUT, it seems like the most harmonious coalition could be the one made up if these three parties worked together (red-red-green). However, this formation does not currently have enough support to build a majority in recent polls, failing 50 % + 1 vote majority with 291/598 seats. It’s going to be an exciting election season!