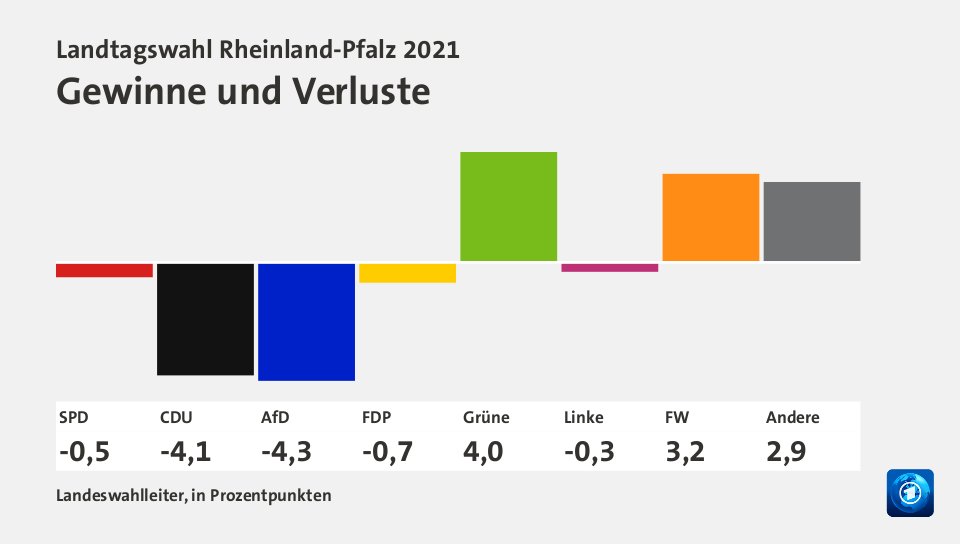 The 2021 Super Election Year (“Superwahljahr 2021”) began with two state elections on March 14. In Baden-Württemberg the Greens (Bündnis 90 / Die Grünen), in Rheinland-Palatinate the SPD (Social Democratic Party of Germany) won, both victories were decisive against the CDU (Christian Democratic Union), Merkel’s party and the larger coalition partner in the federal government. In both states, the current prime ministers get to keep their seats, and both have already declared that they plan to continue with their current respective coalitions: in Baden-Württemberg Greens-CDU (Green-Black), in Rheinland-Palatinate the “traffic light coalition” (SPD-Free Democrats-Greens).

In Baden-Württemberg, the CDU has lost 2.9 % support since the last elections, in Rheinland-Palatinate 4.1 %. The Greens on the other hand were able to increase their support in both states, by 2.3 and 4.0 % respectively. It is also worth mentioning that in Rheinland-Palatinate, the Greens were the only party also represented federally that managed to increase their support, all other major parties suffered losses compared to the last elections. In Baden-Württemberg, the Free Democrats (liberals) also gained 2.2 %.

The right-wing nationalist Alternative for Germany (AfD) Party appears to be losing support, amounting to about 5 % less voters in both states. The Left (Die Linke) did not make it into any of the two state parliaments, they have also never been represented in these states before (the minimum support required is 5 % of the vote).

It shouldn’t come as a surprise that state governments were reelected under the current circumstances. Crisis situations, such as the Coronavirus epidemic are traditionally beneficial for the support of incumbent government officials, as they get constant media coverage in their role in crisis management.

The losses of the CDU could, however, be of relevance to the upcoming federal elections in September 2021. The CDU may have lost voters on account of the current “Mask-Affair” (Maskenaffäre): at least two CDU politicians appear to have pocketed fat commissions of hundreds of thousands of EUR for mediating in deals between companies selling medical face masks and government offices. The two CDU politicians resigned from the party. Further CDU politicians have been accused of receiving illegal payments for lobbying in the interest of Azerbaijan.

Recently, the Merkel government is receiving much criticism for the management of the pandemic. Two weeks ago, an easing of the nation-wide lockdown was introduced by Merkel and the Congress of Prime Ministers, a decision only supported by 30 % of the population according to polls. As grounds for these measures, the availability of free rapid testing, vaccinations and the widespread use of the Germany’s Coronavirus App (Corona Warn App) were cited. But antigen tests are still not widely available, vaccinations move forward at a snail’s pace and the Corona Warn App is riddled with issues. The key ministries for pandemic response (the Chancellor herself, Health Minister Jens Spahn, Minister of Economic Affairs and Energy Peter Altmeier) are all from the CDU and public opinion very much blames Merkel’s party for mismanagement of the Coronavirus crisis.

The suspension of the AstraZeneca vaccine based on concerns about seven (since then, eight) cases of sinus vein thrombosis after 1.6 million vaccinations in Germany came one day after the elections. While the recommendation for this came from experts of the Paul Ehrlich Institute (the German FDA), the decision was ultimately for the government to make. Meanwhile, German infection experts are in disagreement, arguing that the delay in vaccinations represents a higher risk to the public. As the WHO and the European Medicines Agency continue to recommend use of the AstraZeneca vaccine despite these concerns, this could become yet another false decision for the CDU to answer for politically.